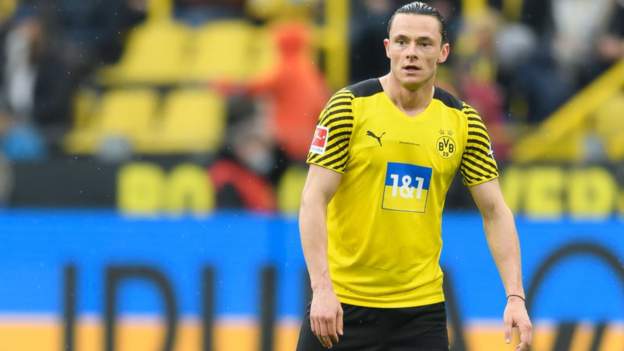 Borussia Dortmund say they have held talks with German defender Nico Schulz after allegations of domestic violence were made against the player.
It has been reported the player’s ex-partner has filed a criminal complaint against him for domestic violence in 2020 and an investigation has started.
Schulz, 29, denies the allegations.
Dortmund said it was not aware of the allegations until they emerged in the German media on Saturday, but they were “extremely serious and shocking”.
The Bundesliga club said at this early stage it could not take any action.
Schulz has been capped 12 times by his country, although he has not played for them since 2020.

The left-back has played 61 games for Dortmund since joining in 2019, but was not included in the squad for Saturday’s 1-0 win against Bayer Leverkusen.

Erling Haaland marks Premier League debut with double against West Ham
BY JERRY APELEOKHAI
Erling Haaland opened his Manchester City goal account and demonstrated the huge threat he will pose this season as the champions began the defence of their Premier League crown in impressive fashion at West Ham United.
The brilliant 22-year-old Norwegian striker delivered exactly what City manager Pep Guardiola wanted following his summer signing from Borussia Dortmund when he gave City the lead from the penalty spot nine minutes before half-time, after he was brought down by West Ham’s substitute goalkeeper Alphonse Areola.
He was on as substitute for injured Lukasz Fabianski but was helpless when Haaland wrapped up City’s win after 65 minutes with a composed left-foot finish from Kevin de Bruyne’s perfect pass.
Manchester City have wasted no time in demonstrating they will be the team to beat in the Premier League title race this season with a superbly controlled display.
Once City had seen off West Ham’s early efforts they dominated possession and won with so much to spare that there were thousands of empty seats in London Stadium long before the final whistle.