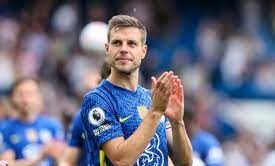 Cesar Azpilicueta’s decision to stay at Chelsea deprives Xavi of the defender he most wanted to build his new look Barcelona around.
The Spanish international who turns 33 at the end of this month was one of the first players the Barca coach called last December when he was trying to organise January arrivals to rescue the club’s season.
The desire to bring him in has remained this summer with Azpilicueta earmarked to play at right-back while also offering Xavi the chance to play with a back three and even give cover to Jordi Alba at left-back.
Xavi has also been keen to bolster the character of his squad. He wants experienced, battle-hardened winners and, as with Robert Lewandowski, he saw those qualities in the Spain international.
Azpilicueta told Xavi last December that as Chelsea club captain there was no way he would leave them mid-season but this summer he was open to a move if something could be sorted out between the two clubs.
Before Roman Abramovich sold the club, Azpilicueta was confident that he would be allowed to move on a free despite playing a sufficient number of games last season to automatically renew his deal.
That willingness on behalf of Chelsea changed when Todd Boehly came in and Marina Granovskaia left.
Boehly felt that he could not let his captain leave no sooner than take charge at least not without a big-name new arrival.
Chelsea knew they were setting Azpilicueta’s price beyond Barcelona’s reach when they slapped a £8million tag on him.
Their resolve not to sell was stiffened as they allowed defenders to leave the club and missed out on replacements – none more so than Jules Kounde who joined Barcelona despite Chelsea’s offer satisfying Sevilla.