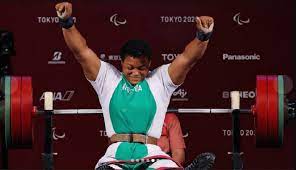 It was a great day for Team Nigeria on Thursday as the country’s national anthem was sung twice at the ongoing Commonwealth Games in Birmingham, following medal-winning performances from Goodness Nwachukwu and Alice Oluwafemiayo.
The duo set new world records in both the women’s discus throw and women’s Para-powerlifting heavyweight events.
Nwachukwu threw 34.84m to break her own world record, which she achieved on March 20 in South Africa, when she threw 33.35m, while Oluwafemiayo recorded a total point of 123.4kg in her event.
Also in the women’s Para-powerlifting heavyweight events, Bose Omolayo came second to win Nigeria’s second silver of the Games.
After ending Day 6 of the Games without a medal, veteran Para-powerlifter Nnamdi Innocent returned Team Nigeria to the podium after winning a bronze medal in the men’s lightweight contest.
Innocent earned a total point of 132.5, after his three attempts, to finish behind Malaysia’s Bonnie Gustin, who claimed gold with a new Games record of 154.6 points, and Mark Swan from England, who finished second with 145.5 points.
Ikechukwu Obichukwu claimed a silver medal late on in the men’s heavyweight Para-powerlifting event.
Nigeria’s Thomas Kure finished in fourth position, the same number of points as his fellow countryman.
Innocent’s bronze on Thursday means Team Nigeria now have a total of nine medals – five gold, three silver and five bronze.
Meanwhile, Team Nigeria’s women’s medal hopefuls Latifat Tijani and Onyinyechi Mark were both disqualified from the women’s lightweight final event.
Also, Temitope Adeshina and Esther Isah made it through to the final of the women’s high jump.
There was more good news for Team Nigeria as Udodi Onwuzurike, Emmanuel Ojeli and Alaba Akintola also scaled through to the semi-finals of the men’s 200m event.
Onwuzurike won his heat, Ojeli and Akintola finished third in their heats, but made it through as two of the best non-automatic qualifiers.
Following an earlier setback for Nigerian men’s table tennis team, there were cheers for Aruna Quadri and Abiodun Bode as the duo progressed to the round of 16 in the men’s doubles against Team Cyprus.
Table tennis also brought some joy to Nigerians as Ogunkunle Isau qualified for the semi-finals of the Para-Table Tennis Men’s Singles Classes winning 5-3.
As the event reached halfway, Nigeria’s chance of winning more medals was brightened as boxer Ifeanyi Onyewere defeated Canadian Mouafo Feujo in the quarter-finals of the heavyweight category to book a semi-final ticket.