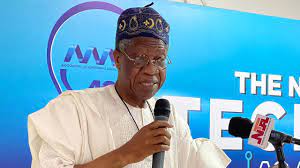 The Federal Government and technology giant, Google, yesterday agreed  to collaborate in  preventing   the use of private and unlisted YouTube channels and live streams by proscribed groups, especially terrorist organisations.

The decision was reached when a Google team visited Information and Culture, Minister  Lai Mohammed in Abuja yesterday.

Mohammed, in his welcome address, requested from the Google officials that channels and emails containing names of proscribed groups and their affiliates should be disallowed on Google platforms.

Some of the channels, according to him,  use local languages during their broadcast to evade being censored.

“Your platform is a platform of choice for IPOB, a proscribed terrorist group.

“We implore you not to make your platform available to them for their acts of violence and destabilisation.

“We hope you will cooperate with us as well as our security agencies in this direction.”

Mohammed told the team  that Nigerians are among the most vibrant social media users in the world, with over 100 million Internet users.

Mohammed also told the team that the same platforms are  used by unscrupulous persons and  groups for subversive and nefarious activities.

He said: “Governments worldwide have reacted in varied and measured ways to protect their citizens.