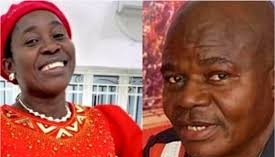 Madam Caroline Madu, mother of the late gospel singer, Osinachi Nwachukwu, and the deceased’s sister, Favour Madu, have insisted that her widower, Peter Nwachukwu, contributed to her death.

They accused Nwachukwu of maltreating his late wife and allegedly preventing her from freely relating with, and assisting her siblings and parents.

The two spoke while testifying as prosecution witnesses in Nwachukwu’s trial before a High Court in Wuse Zone 2, Abuja.

Led in evidence by the prosecuting lawyer, Mrs. Aderonke Imana, Madam Madu, who testified as the first prosecution witness, said the defendant claimed to be an evangelist when he came for her daughter, but turned out to be somebody else when the deceased got to his house.

Madam Madu spoke in Igbo, but had her testimony translated by two translators invited by the court.

She said: “Peter came to steal my child. He told me that he is an evangelist. That was why I gave her my child. He used to beat my child like a carpenter would beat wood.

“When she was pregnant, he used to beat her. I was begging her to come and see me. Her husband did not allow her to visit me, and she would not come for fear that her husband will kill her.

“Another thing her husband told her was that if she did not go alive, she will go in death. When she told me, I told her it was better to come back alive,” she said.

Madam Madu added that at a point, she had to send one of her daughters, Favour Madu “to go and bring her (Osinachi). When they brought her back, she stayed with me in Enugu for a year and three months.

“But, her husband came with some pastors to come and beg Osinachi to follow him back. I begged my daughter not to go back.

“My daughter said what God has joined together, no one should put asunder; that she has married him and she is willing to live with him.

“When she went back, her husband started maltreating her like he used to do, but shame did not allow her (Osinachi) to tell me,” the witness said.

Under cross-examination by defence lawyer, Isa Aliyu, Madam Madu said she did not know if her late daughter had any other medical conditions outside ulcer and that all she said about the frosty relationship between Osinachi and the defendant was from her interaction with the late singer.

Favour claimed that the way the defendant maltreated her sister led to her death.

Under cross-examination, Favour said she was unhappy with the defendant because of the way he treated his late wife and prevented her from assisting her parents and siblings.

The trial has been adjourned till today.