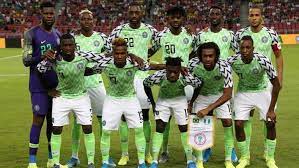 Despite failing to win a game in their last five matches, Super Eagles stars have promised to end their winless run with a victory over Sierra Leone on Thursday (today), The PUNCH reports.

The 2013 Africa Cup of Nations champions kick-off their qualification for the next edition of the tournament billed for Ivory Coast with a home clash against the Leone Stars whom they have failed to beat in their last two meetings.

Nigeria were held 4-4 by Sierra Leone at the Samuel Ogbemudia Stadium, Benin City on November 11, 2021 and four days later played out a goalless draw in Freetown during qualifiers for the 2021 AFCON.

Some players, who spoke to the media on Wednesday, said they were fully prepared to begin their AFCON qualifying campaign on a winning note.

Captain Ahmed Musa said the Eagles were on a redemption mission to ensure that they restored the pride of the nation and the confidence of their esteemed fans.

“We know that we made a very big mistake by failing to qualify for the 2022 World Cup and definitely we don’t have any excuse to give our fans,” Musa began.

“I know the fans are disappointed as recent results have dropped their support for the team, but we are working hard to make them happy and proud.

“What happened in our game against our opponents (Sierra Leone) two years ago has given them a bit of confidence coming into this game but we will do all we have to do to ensure we win the game,” Musa said.

His assistant, William Troost-Ekong, also expressed confidence in the team’s ability to bounce back from their recent setbacks.

“We have great confidence, we believe in ourselves and we know that on our day we can pretty much beat most or maybe even all of our opponents in the AFCON,” the Watford defender said.

“The opponents will always do everything to make it hard for us to beat them and we are very much aware of that.”

Defender Leon Balogun said the team could not afford to be complacent as there were no more minnows in Africa.

“I don’t really like to talk about our failure as a team not to qualify for the World Cup because that is out of our control now. But what’s important and at stake now is to qualify for the AFCON. Our main target is to kick-start our campaign on a high.

“We are indeed working on making sure we are 100 per cent ready and prepared for the game on Thursday (today).

“We cannot afford to lose focus or give our opponents any chance. We’ve learnt our lessons from the last time out after our opponents took full advantage of our complacency in the game.

“So, it’s a big lesson for us never to underestimate any opponent in Africa.

“Having said that, we are looking forward to redeeming our image as a team, starting with the game against Sierra Leone,” he said.