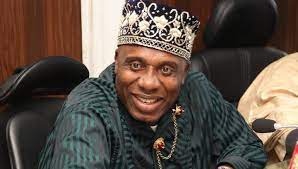 Friday’s resignation of Minister of State (Mines and Steel Development) Uche Ogar increased the number of ministers who exited to contest election to four.

Those who resigned earlier are: Emeka Nwajiuba (Minister of State for Education); Ogbonnaya Onu (Minister of Science and Technology); and Godswill Akpabio (Minister of Niger Delta Affairs).

All the members of Federal Executive Council (FEC) and heads of Ministries, Departments and Agencies (MDAs) seeking party tickets, have till today to exit government.

The youngest member of FEC, 38-year old Ahmad Zakari, the Presidential Adviser on Power, is also expected to resign having obtain form seeking nomination to run for governor of Jigawa State.

Speaking on the matter yesterday

The Director of Information in the Office of the Secretary to the Government of the Federation (OSGF), Willie Bassey, said SGF Boss Mustapha is only a conveyor of the responses to the President.

He said: “The way the SGF works is once he gets the letters, he just takes straight to either the Chief of Staff or the President himself, who is the appointor. So, he’s just like a courier.

“The best way to go about this is to wait till tomorrow (today) when the time given for resignation to those contesting offices, which is just a couple of hours. My advice is for us all to wait it out and see who has resigned and who is staying on.”