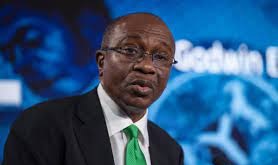 Details of the meeting were unavailable, but Emefiele told reporters to expect “news”, adding that he was “having fun” with speculations around his purported bid for the All Progressives Congress (APC) presidential ticket.

When reminded that given the office he holds, his ambition is creating anxiety among Nigerians and the international community, Emefiele quipped that he was having fun with the situation.

Posters and vehicles branded with his face are in town.

A group also purchased the APC nomination and expression of interest forms on his behalf.

Emefiele has, however, disowned the group, claiming it was done without his consent.

But, he went to court for constitutional interpretation of his continuous stay in office while bidding for the ticket.

Wednesday’s presidential directive has put paid to any doubt on whether appointees eyeing political offices should exit.

Secretary to the Government of the Federation (SGF) Boss Mustapha, clarified the resignation directive by the President in a circular dated May 11.

The circular explained that the Presidential order is not limited to the members of the Federal Executive Council (FEC) but all ministries, departments and agencies.

The circular reads in part: “Mr. President has observed and noted the expression of interest and intention by some members of the Federal Executive Council, heads of extra-ministerial departments, agencies, parastatals of government, ambassadors and other political office holders to contest the upcoming presidential, gubernatorial, national and state assemblies elections.

“Consequently, Mr. President has directed that the affected office holders aspiring to run for various offices in the 2023 General Elections, should tender their resignation on or before Monday, the 16th of May, 2022.

“For the avoidance of doubt, this directive affects all ministers, heads and members of extra-ministerial departments, agencies and parastatals of government, ambassadors as well as other political appointees who desire to contest for elective offices.

“For smooth running of the machinery of government and our foreign missions, affected ministers are to hand over to Ministers of State where they exist or to the Permanent Secretary, where there is no Minister of State.

“Ambassadors shall hand over to their Deputy Heads of Mission or the most Senior Foreign Service Officer in line with established practices.

“Similarly, Heads of Extra-Ministerial Departments, Agencies and Parastatals are to hand over to the most senior Director/Officer as may be peculiar to the organisation, in line with the service wide Circular No. SGF.50/S. Il/C.2/268 of 4th December 2017.