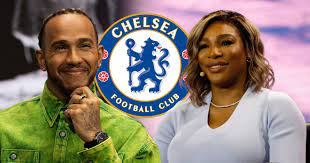 It is reported that Hamilton and Serena have pledged ‘millions of pounds to one of the parties in the running to buy the Premier League club.

With only three consortia still in with a chance of purchasing the Blues from Roman Abramovich, one of the bids has received huge backing from two of the biggest names in global sport.

According to Sky News, Hamilton and Serena have backed the bid from former Liverpool and British Airways chairman Sir Martin Broughton

It is claimed the duo have pledged £10million each to Broughton’s takeover pursuit.

It’s arguably the biggest news yet in the race to buy Chelsea and bring an end to the restrictions placed on the club due to sanctioned Russian owner, Abramovich.

There are only three interested parties still in the running, with Broughton’s the only British-led bid remaining in the process with Lord Sebastian Coe another of its backers.

The Ricketts family withdrew their bid last week, although in a statement said the decision was unrelated to the huge opposition from Chelsea supporters amid a racism storm.

The other two consortia still in the running both come from the United States, with one led by LA Dodgers part-owner Todd Boehly and the other spearheaded by Boston Celtics owner Steve Pagliuca – whose bid has garnered the support of The True Blues Consortium – a Chelsea fan group which boasts former captain John Terry as one of its founders.

But Hamilton and Serena are the biggest sporting names to enter the race, as they continue their growing investment profiles.

It is claimed that both sporting icons have been in talks with Broughton’s group for ‘several weeks.

Although the news of F1 giant Hamilton’s involvement may not please Chelsea supporters, the British star is a boyhood fan of London’s rivals Arsenal.