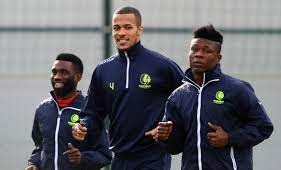 The Nigeria international missed the Hornet’s 2-1 defeat to Brentford last weekend due to a slight hamstring strain.

Troost-Ekong has not made an appearance for the London club since the 1-0 loss to Tottenham Hotspur at Vicarage Road on New Year’s Day.

The 28-year-old has made 16 league appearances for Watford this season.

His compatriot Samuel Kalu will however play no part in the game due to a knee injury.

The winger, who linked up with Watford from Ligue 1 outfit Girondins Bordeaux in January has made just two league appearances for the club.

The other Nigerians at the club Emmanuel. Dennis and Oghenekaro Etebo are in contention to face the Citizens.