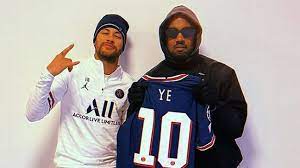 They met at a PSG training facility where Neymar and Kanye posed with a customised PSG home Jersey in Kanye’s name.

Neymar, who could not hide his excitement, posted on his Instagram account the picture of their meeting.

Neymar jr, whose real name is Neymar da Sila Santos is regarded as one of the best players in the world. He moved from Barcelona to PSG in 2017 after scoring 68 goals for the club. He has also scored 59 goals for his current club.

Along with the photos was a message that said, “Nice to meet u legend 👏🏽 @kanyewest.”