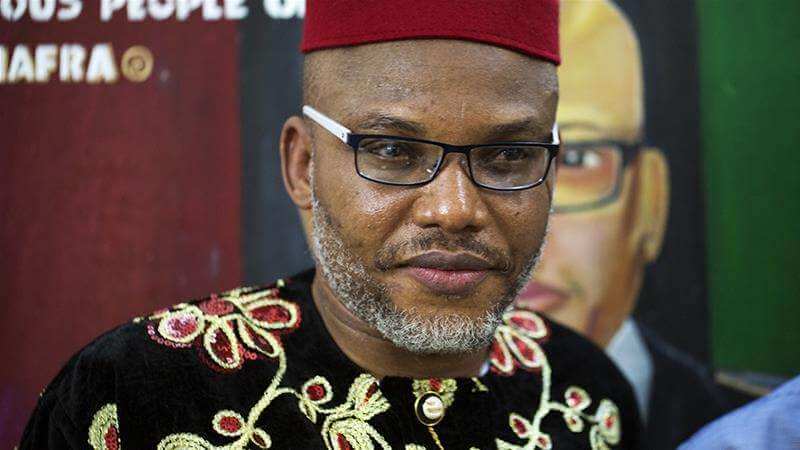 Detained leader of Indigenous People of Biafra(IPOB), Nnamdi Kanu has appealed to his supporters to conduct themselves in a peaceful manner during his next court appearance.

His lawyer, Ifeanyi Ejiofor made this known in a statement after his visit on Thursday to Kanu in detention.

He said the IPOB Leader was in a cheerful mood and confident of victory in the long run.

Ejiofor said: “We undertook our customary visit to Onyendu in DSS custody today. In the course of the visit, our discussions focused primarily on our final preparations for the legal battle that would resume on the turf of the Federal High Court, Abuja Judicial Division, from next week and on subsequent adjourned dates, if any.

“We coalesced the product of our individual reflections on the most potent legal strategies henceforth to be adopted, fine-tuned and harmonised them, and then distilled them into a single, conclusive, potent, workable formula.

“We are optimistic that the court outings of Onyendu would be impressive. Onyendu himself is in high spirit. Our discussions with him further reassured him and strengthened his determination to persevere unrelentingly.

“Onyendu is fully prepared to appear in court as from the 18th of January, 2022. He is rooting for victory and knows that, with the help of Chukwuokike Abiama, victory is assured. ”

Ejiofor said the World will behold an interesting dimension in the harmonised workable formula the IPOB Leaders legal team has evolved, adding that Kanu’s detractors will be comprehensively humbled and permanently put to shame.

“Further, Onyendu utilised the opportunity afforded by our visit to mandate us to admonish his teeming supporters and followers.