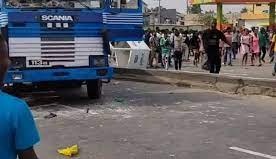 There was a protest by residents yesterday at Ojodu, a Lagos suburb, as an articulated truck crushed pupils of Babs Fafunwa Millennium Secondary School, who were returning home after school hours.

No fewer than 17 students were feared dead at the Grammar School Bus Stop, Ogunnusi Road, along Ogba-Ojodu/Berger axis, according to an eye witness, who said the truck driver was trying to evade arrest by Vehicle Inspection Officers (VIO) and men of the Lagos State Transport Management Agency (LASTMA) from Berger Division, Ikeja.

Anxious parents stormed the scene, a stone throw from the Ogba/Ojodu road to inquire about the corpses and the injured victims.

Economic activities were paralysed as residents trooped out to protest the avoidable tragedy, blaming the notorious driver, VIO and LASTMA officers for the accident.

However, the Lagos Stae Police Command confirmed that the corpses of 10 pupils evacuated from the accident scene have been taken to the mortuary.

Other casualties are receiving treatment at the hospital, the police added.

The truck was set ablaze by the angry mob while the VIO vehicle was vandalised.

Also, the mob chased the driver to Ogba, where he was apprehended by the police.