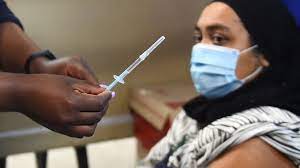 Some 8,500 new Covid infections were registered in the latest daily figures.

That is almost double the 4,300 cases confirmed the previous day.

By contrast, daily infections were averaging between 200 and 300 in mid-November, a top South African scientist told the BBC.

Omicron has now been detected in at least 24 countries around the world, according to the World Health Organization (WHO).

South Africa was the first country to detect the highly mutated new variant. Its National Institute for Communicable Diseases (NICD) has said more than 70% of all the virus genomes it sequenced last month have been of the new variant.

India, Ghana, Saudi Arabia and the UAE are among the latest countries to have confirmed their first cases of Omicron. Others including the UK, US and Germany have also seen people infected by the new variant.

Many questions about Omicron remain to be answered, including how much protection current vaccines provide.

The WHO has categorised it as a “variant of concern”, and says early evidence suggests it has a higher re-infection risk.

Earlier this week, countries around the world restricted travel from southern Africa as details of the spread emerged.

South Africa’s President Cyril Ramaphosa also said he was “deeply disappointed” by the travel bans, which he described as being unjustified.