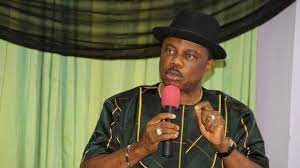 Anambra State Commissioner for Information and Public Enlightenment, Don Adinuba, has said that the governor of the state, Willie Obiano, is currently out of Nigeria, adding that his principal did not disguise when he used one of the international airports to travel out of the country.

This was in reaction to the news that the Economic and Financial Crimes Commission (EFCC) has placed the governor on a watchlist. The governor will conclude his tenure on March 17, and it’s suspected that he may leave the country after then.

A press statement by the Anambra State government, which was signed by the commissioner for Information and Public Enlightenment, Mr C. Don Adinuba said there was no doubt that the governor will leave the country after his tenure as he has always announced so, but insisted that the governor was ready to account for his years in office.

It is not clear why the anti-graft agency placed the governor on security watch but sources said the move is an indication that the agency may have been discreetly investigating Obiano and possibly have intelligence that he plans to escape after he hands over power to his successor, Charles Soludo, as sitting governors in Nigeria have immunity from criminal prosecution while in office.

But Adinuba said the EFCC is being used by politicians who lost the Anambra governorship election to Obiano’s All Progressives Grand Alliance.

Everything that can be wrong with politically motivated statements like this one is obviously wrong with this statement. The EFCC knows full well that it is acting inelegantly in this instance, and so has tried as much as possible not to make an official public statement on the alleged placing of Chief Obiano on the watch list. It furtively gave a section of the media the news report it wrote based on ostensibly its letter to the NIS on November 15.

“They are those responsible for the sacrilege of a customary court in Abuja issuing criminal summons to Professor Soludo, a former Central Bank of Nigeria governor. These people are still fighting the gubernatorial battle on behalf of their badly defeated friends and political associates in the Anambra vote. They will fail badly, as they have done in the recent past.

“The EFCC should not allow itself to be used by politicians who are mere birds of passage. Its ongoing Anambra drama is in bad taste. It did not serve Governor Obiano any notice. Nor did it invite him to answer questions about his service record. It just went to the press. Yet, the governor is willing to answer any questions about his years in office. After all, he has received a prestigious award from the United Nations Development Programme for social service integrity,” the release stated.