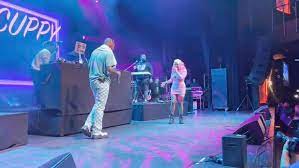 The duo successfully reunited last night and performed their hit single “Gelato”, after months of the feud.

DJ Cuppy revealed this on her verified Twitter page, sharing a video where she showed up at the O2 Arena and surprised Zlatan by joining him on stage.

Before going on the stage, DJ Cuppy said, “I’m about to go on stage and surprise Zlatan. He doesn’t know.”

Therefore, this recent surprise by DJ Cuppy has suggested that the duo has squashed their beef.