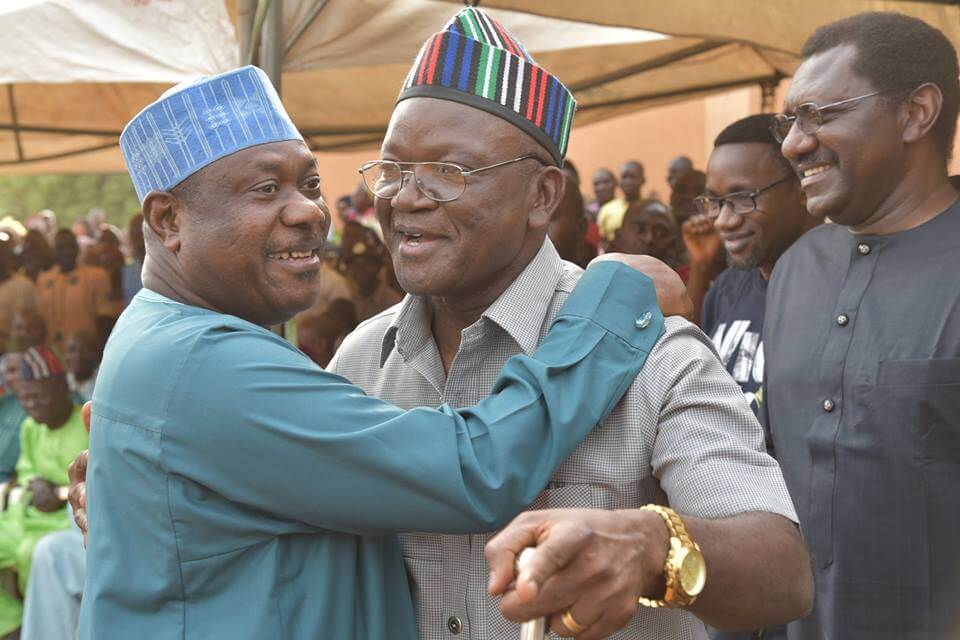 The chief press secretary to Samuel Ortom, governor of Benue, Terver Akase, has tackled minister of special duties and intergovernmental affairs, George Akume, for asking his principal to apologise to President Muhammadu Buhari.

Akume, at a media conference on Monday, had asked Ortom to tender an “unreserved apology” to Buhari over his recent media interview and for using “foul language” against the president.

The minister also asked the Economic and Financial Crimes Commission (EFCC) to probe the administration of Ortom from 2015 to date.

But reacting to Akume’s position, Akase said the minister made the comments against Ortom in order “to secure a meal ticket”.

“We read the text of press conference addressed today in Abuja by the Minister of Special Duties and Inter-Governmental Affairs, Senator George Akume with other All Progressives Congress leaders from Benue State,” the statement reads.

“We had earlier alerted Benue people and other Nigerians to expect the said press conference. It is one in a series of an organised smear campaigns against Benue State Governor, Samuel Ortom.

“As expected, Senator Akume and his group avoided responding to the issues of insecurity in the country which the Governor has repeatedly and rightly accused the Presidency of complicity.

“The outing of George Akume and others in Abuja was nothing more than a massage on the ego of the Presidency to curry personal favours. As long as he and his group secure their meal tickets, Benue can go to hell. A media attack on Governor Ortom instantly attracts a package from the Villa.

“Akume and his group must have been under immense pressure to hold the press conference and hurl vituperation against the Governor. This, they had to do to keep their jobs.

“The leadership of APC in Benue, having lost grip of the party membership in the state with hundreds defecting to PDP every week, now see a window of opportunity to relaunch themselves into relevance.

“As a two-term former Governor of Benue State, it is shocking that Akume is now calling for the declaration of a state of emergency in the state to dismantle democratic structures.

“Is it not contradictory that Akume faults Governor Ortom over his statements on the President’s handling of the security situation in the country but goes ahead to brand the Governor as a criminal and sponsor of a militia? We challenge the Minister to provide evidence to back his claim that the Governor is involved in corruption and sponsors militia.”

According to the governor’s aide, Akume had also criticised former President Olusegun Obasanjo on insecurity while he was in power.

“We recall that when he was Governor, Akume challenged the then President Chief Olusegun Obasanjo for not doing enough to end the Jukun/Tiv crisis on the border of Benue and Taraba State,” Akase said.

“He is on record to have confronted President Obasanjo and said uncomplimentary things to the President. Now he finds it convenient to give lectures on respect for hierarchy in government and age”.

Speaking on the call for a probe of the current administration by the EFCC, the chief press secretary asked the anti-graft agency to begin the investigation from 1999 when Akume was governor of the state.

“On his call for a probe, we have no objection to that. Governor Ortom is running a transparent administration and has nothing to hide,” he said.

“We however invite Economic and Financial Crimes Commission, EFCC, to begin their probe from 1999 when Akume became Governor. The N2 billion that went missing at the twilight of his administration is yet to be accounted for.

“Akume’s utterances in 2019 are still fresh in the minds of Benue people. After the state came under herdsmen attacks and hundreds were killed, he accused Benue people of killing themselves. That the people responded to him by voting him out of the Senate confirmed their anger towards him.

“Lastly, we expected APC to hold the press conference in Benue to test their popularity among the people of the state.”