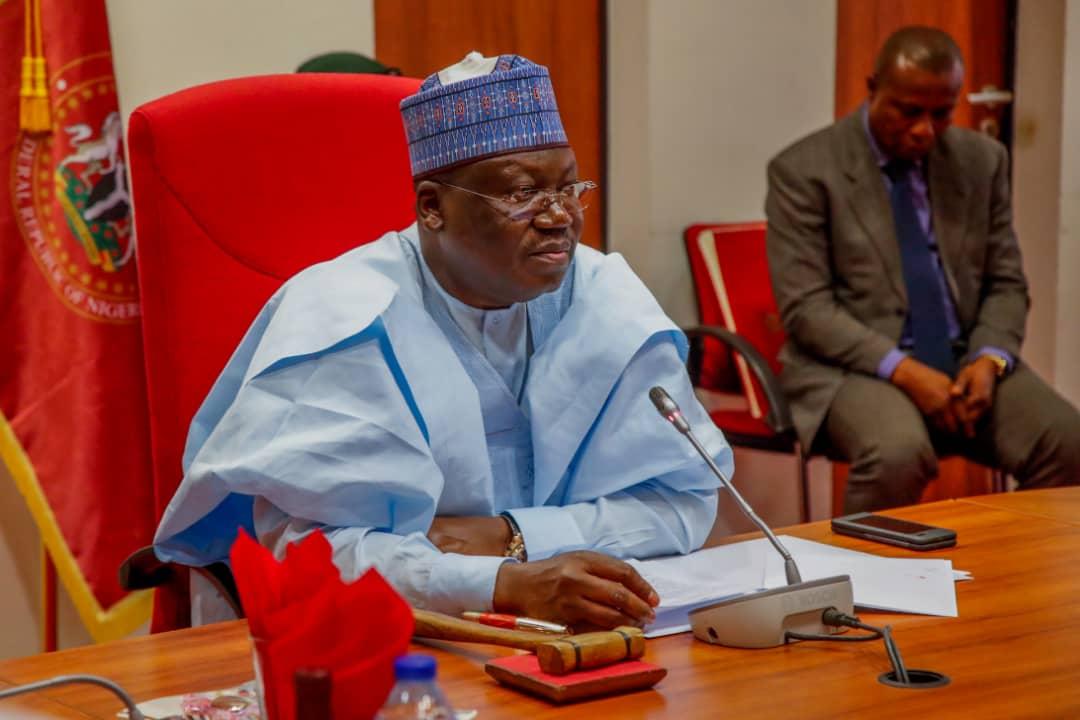 The Senate President, Ahmad Lawan, said on Monday that the reports that Boko Haram elements are coming out of their trenches to surrender to Nigerian troops should be seen as a welcome development and should be encouraged.

Lawan stated this in Maiduguri, Borno State at the Palace of Shehu of Borno, Abubakar El-Kanemi.

The Senate President was in the state, in the company of the Yobe State Governor, Mai Mala Buni, on a condolence visit to the Monarch who lost his elder brother and also to the family of former Foreign Affairs Minister, Ambassador Babagana Kingibe over the death of his mother-In-Law.

The Borno State Governor, Professor Babagana Zulum and his Deputy, Umar Usman Kadafur were also on the ground to play host to the visitors at Kingibe’s residence as well as the Shehu of Borno’s Palace.

The Senate President seized the opportunity of the condolence visit to reassure the people in that part of the country that the Federal government would continue to work with the State authorities to ensure restoration of peace and stability in the region.

“We have come to condole you over the death of your elder brother that occurred recently. May his soul rest in Ajanaah Firdausi.

“This is a loss not only to you, Your Highness but to all of us. That is why we have deemed it fit and necessary to come and condole with you, the family and the good people of Borno State.

“I want to take this opportunity to mention that the Federal government of Nigeria will continue to work with Borno State Government to ensure that there is a restoration of peace and stability in this state and in this part of the country.

“The recent surrender by Boko Haram elements is a good development for the security of this country. Personally, I believe that the Federal government must work with the Borno State Government and other states in this part of the country to ensure that those that have been received are appropriately processed.

“Those that have no issues to answer are sanitised and taking back to their communities. Those that may have issues to answer should be taken through the legal processes but we must ensure that we encourage Boko Haram elements and those they have taken by force to come out to surrender so that this unnecessary insurgency placed on us comes to an end.

“And I want to assure you, Your Royal Highness, that the National Assembly and particularly the Senate will work very closely with the Borno State Government in this respect.

“I believe there is no need for any controversy over what we need to do with people who surrendered. In any war, in every war, surrender is the ultimate and if we can achieve it, we should do everything and anything possible to encourage more and more to come out so that we are able to come to the end of this unnecessary insurgency that has taken our States back for so many years in term of development.

“I want to also commend you, Your Royal Highness, for the leadership and fatherly role you have been giving in this state and in this part of the country and the country at large.

“Your Royal Highness, I want to also commend the Governor of Borno State, our brother and friend who has shown so much commitment, dedication and leadership in ensuring that Borno State, as much as possible, is safe and the people of this state are protected from the insurgency.

Responding, the Shehu of Borno said his people had “seriously suffered as a result of Boko Haram crisis.” but added that they were “lucky” to have the Buhari Government which eventually changed the tide.

The monarch said all the local government Areas which were under the control of Boko Haram had been taken back and that normal business activity had returned.

He said the news that Boko Haram elements are surrendering “is a welcome development” because “Borno is a home of peace and we are for peace.”

The Senate President and Yobe Governor were both accompanied on the trip by Senator Sadiq Umar Suleiman, Chief of Staff to the Senate President, Dr. Babagana M. Aji, Permanent Secretary (Yobe State), Ambassador Zanna Aliyu Ibrahim and Ambassador Babagana Ajimi who is the Chairman, Board of Directors, Federal Neuro-Psychiatry Hospital, Kaduna.