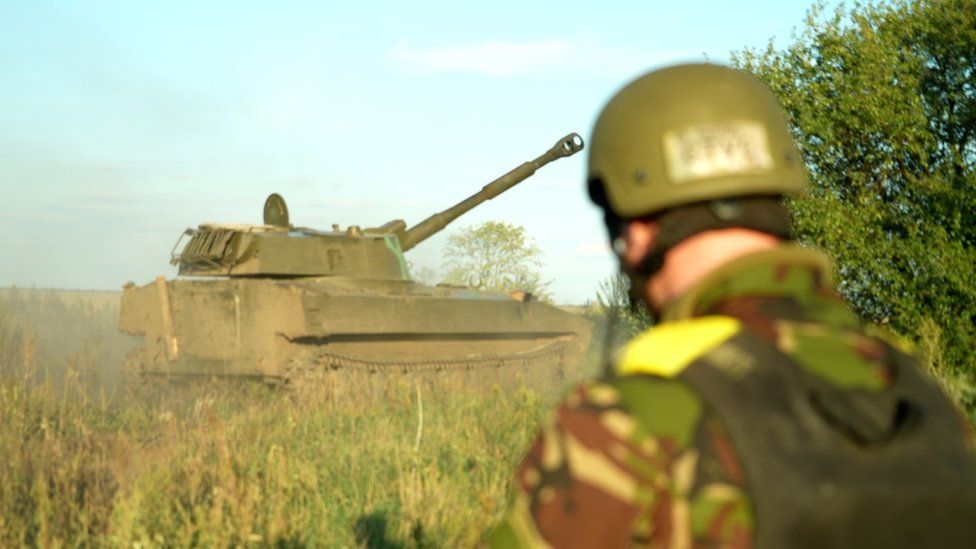 Ukraine’s progress in the southern regions of Kherson and Zaporizhzhia has been far more limited than its successes in the north-east. Front line positions come under regular fire as both Russia and Ukraine attempt to push forward. The BBC’s Abdujalil Abdurasulov gained rare access to the Ukrainian front line in Kherson region.

An old Soviet self-propelled howitzer called Gvozdika or “Carnation” is rolled out in an open field and put into position. Its barrel tilts up. “Fire!” comes the command.

The gunners hastily move away after the last shot, acting quickly.

Although the advancement of Ukrainian forces in the south is very slow, their artillery units remain busy.

Stus, commander of the gunners, explains that the Russians target his infantry and they respond in order to silence them.

Their job is very much felt at the front line. Soldiers walk across the vast field under the cover of a line of trees. They pay no attention to the sound of missiles flying above their head nor the thud of explosions. The fighters say a Russian observation post is 500m away and they might be within the range of small arms.

The Ukrainians move quickly to reach a destroyed farm building that they took back just a week ago. Now, they are digging trenches and carrying sandbags in order to fortify their new position.

But Ukraine’s advancement in the south is moving slowly.

All talk about counter-offensive here helps to deceive Russians and achieve gains in the East, laughs Vasyl, a deputy commander of the regiment.

“But we have some success here as well. We continue liberating villages with small steps but it’s very difficult – every victory we have is covered with blood,” he adds.

Many Ukrainians who remain behind the Russian front line, in the occupied territories, are anxiously waiting for this counter-offensive.

“We’re euphoric when Ukraine hits the occupied territories,” says Iryna, a resident of Melitopol in the south. “It means that Ukraine has not forgotten us. We all know that living near military infrastructure and buildings is not safe, so most civilians have moved out from those locations.”

But for people in the occupied territories, the longer they wait, the harder it is to survive. Many believed that the counter-offensive would happen in August. But when that didn’t happen, people started to flee towards Ukrainian controlled territories and areas further to the West.

Among them was Tatyana Kumok from Melitopol. The Israeli citizen was visiting her hometown when the Russian invasion started in February. She stayed in the city and distributed aid to residents but in September, she and her family decided to leave. One of the main reasons for leaving was Russia’s promise to hold a so-called referendum.

“As soon as it’s done, the Russians will introduce new bans according to their laws and try to legitimise the occupation,” she says.

With the city turned into a giant military base, she says it is clear that Russian troops won’t abandon the city easily.

“It was obvious the city won’t be liberated this fall,” she adds.