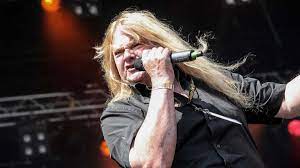 The death of Grim Reaper frontman Steve Grimmet has been confirmed by his family, the cause of his death is yet to be made know to public.

The English heavy metal vocalist of the New Wave of British Heavy Metal pioneers, Steve Grimmett, was born on the 19th of August, 1959. He was the lead vocalist for the band Grim Reaper.

He started his career in the days of the new wave of British heavy metal. Prior to being well-known as the lead vocalist for Grim Reaper, he was a member of the short-lived band Medusa.

After briefly appearing in the onslaught, he went on to found Lionheart and, more recently, The Steve Grimmett Band and GrimmStine.

Grimmett would go on to front Lionsheart for five albums – and was considered as a replacement for Bruce Dickinson when he left Iron Maiden – before two more with Grim Reaper, 2016’s Walking In The Shadows and 2019’s At The Gates, and The Sanity Days‘ Evil Beyond Belief, made with other former members of Onslaught.

In January 2017, the singer had his right leg partially amputated in order to “remove an infection from his foot and bones” after being hospitalised in South America, which led to “Grimm Up North”, a fund-raising gig that took place in Bury featuring a cast of NWOBHM-connected bands including Holocaust, Oliver Dawson Saxon, Tysondog, Spartan Warrior, Salem and Scarab.

“I have no regrets whatsoever,” Grimmett told VWMusic earlier this year “I should by rights be a millionaire, but I haven’t got a penny to my name. I’m on welfare at the moment because of COVID, and a lot of people do think that I am a millionaire, but I can tell you now, I’m not. I’ve never received a penny – not one penny – from Grim Reaper, so that says it all, doesn’t it?

“But still, no regrets. I still love getting up there and playing. I still love watching the smiling faces in front of me. That says it all and does it all for me.”

No cause of death has been announced.