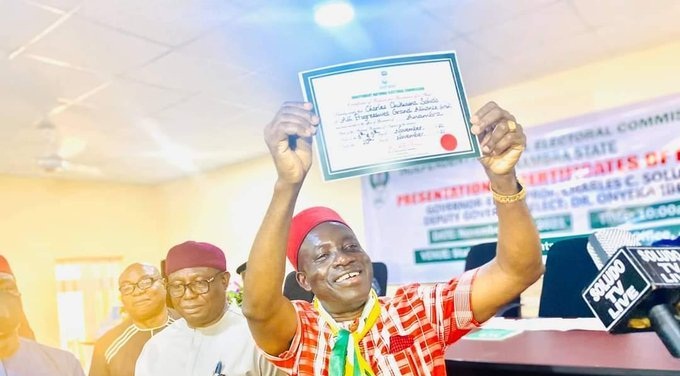 The Independent National Electoral Commission on Friday presented the Certificate of Return to Professor Chukwuma Soludo for winning the Anambra State governorship election which was held on November 6.

The presentation took place in Awka, the Anambra State capital with his Deputy also present at the event.

Soludo was the candidate of the All Progressives Grand Alliance which is currently ruling the state with Governor Willie Obiano.

He won 19 of the 21 local governments areas including Ihiala LGA which had its own election done on Monday.

Soludo polled 112,229 votes, thereby defeating his closest rivals, Valentine Ozigbo of the Peoples Democratic Party who polled 53,807 votes, Senator Andy Uba of the All Progressives Congress who got 43,285 votes and Ifeanyi Ubah of the Young Progressive Party who polled 21,261 votes.