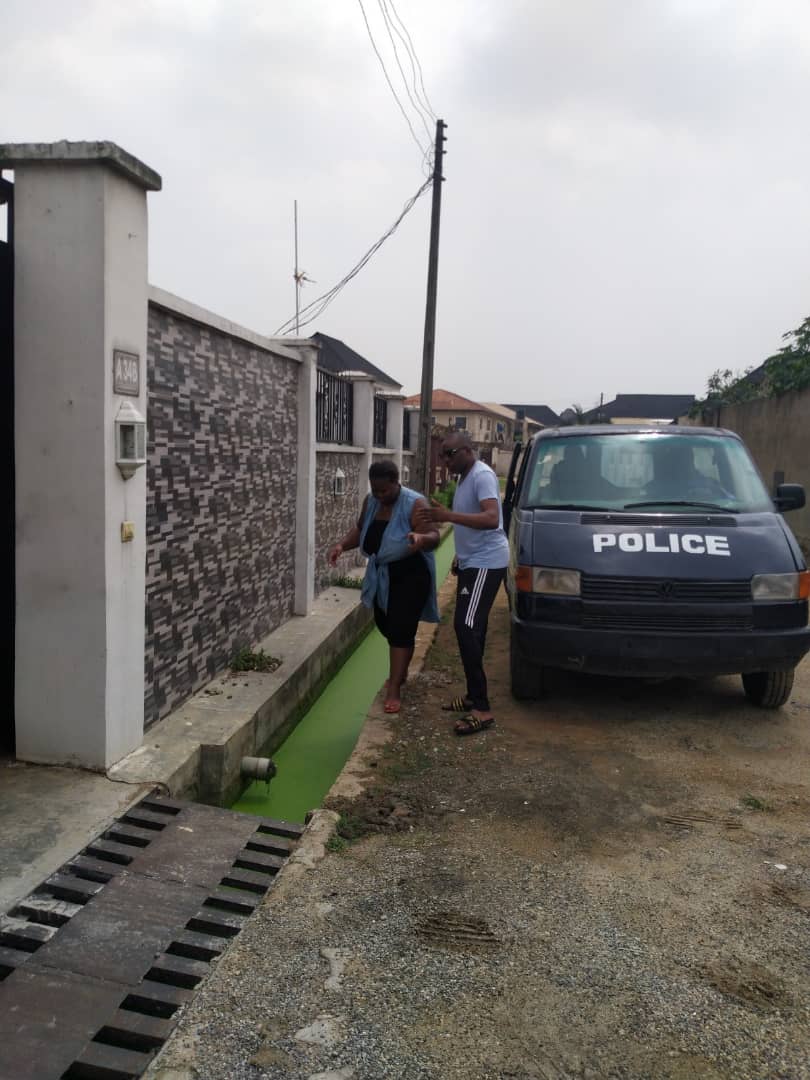 These are not The Best of Times, For, Air Commodore, ‘ Lere Osanyintolu Rtd., Who Notoriously, Nicknamed, OLOWO OSHODI, When He He was Famously, Implicated, on Charges, Relating, Allegedly, to Diversion Of Funds, Meant for Arms Acquisition, at the Tail-End of the Jonathan-Administration.

He Is Alleged, to have Splashed Hundreds, of Millions, Of Naira, on Properties, Hidden, Within, SPARKLIGHT ESTATE, Located, Near Isheri, on the Lagos/ Ibadan Expressway), Allegedly, from His Activities, Relating to The Diversion Of Funds, Meant, For The War,, against the Boko Haram, Insurgency, Having Headed A Desk, of The Airforce, Specialising, in Foreign Arms Acquisition.

Air Commodore, ‘Lere Osanyintolu, Had Ventured, Into, Water Drilling ( Mining), within the Said, SPARKLIGHT ESTATE, on His Property, Located, at No.9, Close 8, Road A, Phase 2,
With a Purse, Allegedly, of Over 50 million Naira.
This is Despite The Designation of the Estate, and Said Property, as PURELY, RESIDENTIAL.

Air Commodore Lere Osanyintolu Rtd., And, Messrs. KONPET DRILLING, represented, By a Turkish Plumber, Posing as an Engineer, in Collaboration, With a Local Artisan, OLUSEGUN MEDELU, also, Claiming to Be an Engineer, Unfortunately Ruined, The Ecosystem, of The Said Estate, By Drilling, to a Depth of 520 metres, For Mineral Water.
KONPET DRILLING, Allegedly, Abandoned the Project, Having Drilled past The Soil Layer, and Stratum, Holding Pure Drinkable water.

This Happened, Because, The Drillers, Did Not Posses, At that Time, a Duly Certified, Environmental, Impact Analysis( EIA) Document, and That Clearly, Non Professionals, Were Used, For The Water, Borehole, Drilling Project.

If The Environmental Risks, and Constant Flooding, and Irreversible Damage, to Other Properties, was a Concern, The Physical Brutalisation, of individuals, Who Dare, to Challenge, Air Commodore Lere Osanyintolu Rtd., On Issues of Ethics, or Service Delivery, within The Estate, Has Become Forefront issues.

He is Alleged, to Constantly, Humiliate, RESIDENTS, using Armed Airforce, and Police, Personnel, and Turning odd, all water Supply, to the Estate, If a Single Subscriber, was in Debt.

In Recent Months, However, Things Have Turned Sour ,Between Air Commodore Lere Osanyintolu, and the Residents.

Since, His Alleged, Dishonourable Discharge, From The Nigeria Airforce, His MONEY- TAP, Had Run Dry

The EFCC, Had Clamped Down on Him Heavily, Making Him, Reveal Secret Monies, and Disbursements, to His Bosses, and Colleagues.
Most of Whom are Allegedly, Still in Jail.

Though, His Water, Is Unsafe, for Human Consumption, He is Determined, to Build a Water Bottling Factory, within the Estate, Which is Classified as Residential, and Without the Necessary, Statutory, Approvals.

Recently, Financial Pressures, Have come to Bear, on The Flamboyant Ex- Airforce, Commodore.

He Had Engaged in Frequentl Price- Increments, for His Services, Prompting THE RESIDENT ASSOCIATION, to Allegedly, seek for Alternatives, to His Water.

From Sources, Close to Him, He Is Allegedly Putting His Properties, Up for Sale, With Some Influential Members, Of The Estate Community, Offering Peanuts, for Them.
There is a New Wave Of INVESTIGATIONS, Into His Alleged Financial impropriety, Inch Dangerously Close.
Added to All Of his Headaches, Is Some Alleged Set of Issues, on The Home Front, with Him, Being The Last to Realize, Some Open Secrets.