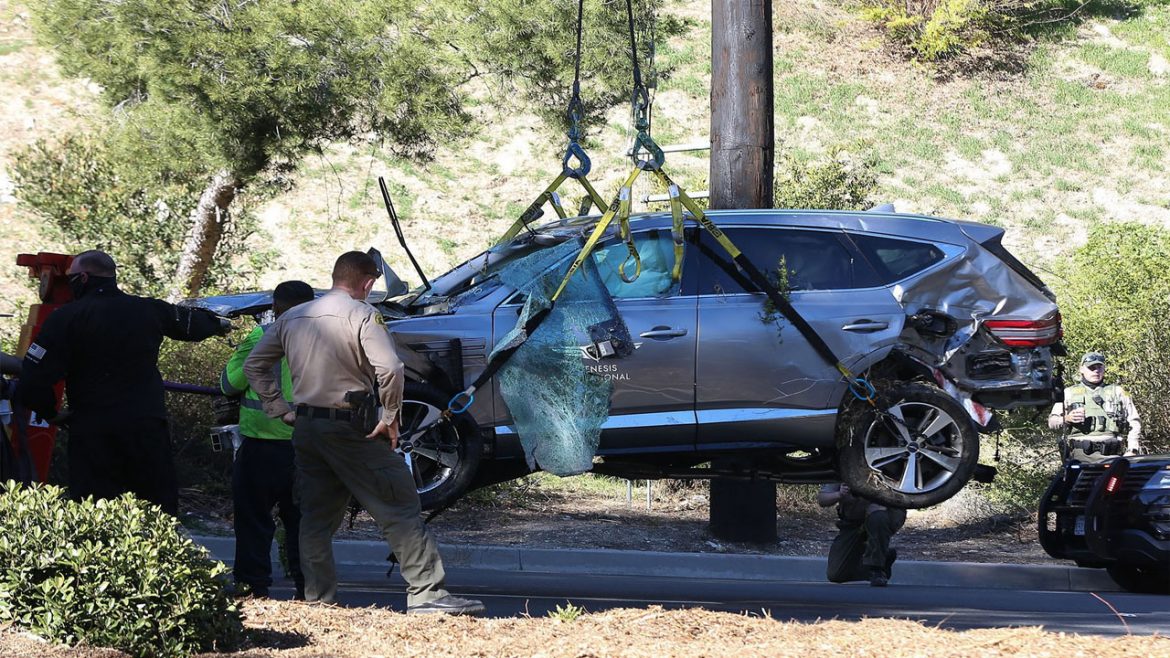 Tiger Woods ‘awake and responsive’ as he recovers from surgery after horror car crash
The golf legend was hospitalised with “multiple leg injuries” after the car crash, which required him to be cut out of his overturned vehicle with an axe in California
TIGER WOODS IN SURGERY FOR MULTIPLE LEG INJURIES AFTER CAR
Our free email newsletter sends you the biggest headlines from news, sport and showbiz

When you subscribe we will use the information you provide to send you these newsletters. Sometimes they’ll include recommendations for other related newsletters or services we offer. OurPrivacy Noticeexplains more about how we use your data, and your rights. You can unsubscribe at any time.
Tiger Woods is “awake and responsive” following a horror crash that has left him with possible career-ending injuries.

The golf legend was hospitalised with “multiple leg injuries” after the car crash, which required him to be cut out of his overturned vehicle with an axe in California and in need of major surgery yesterday.

He is reported to have needed a metal rod inserted into his shattered right leg and screws and pins put in his ankle.

In a statement this morning, his team said the 45-year-old is recovering in hospital after suffering serious injuries to his right leg and ankle.

Rescue teams had to pry Woods from the wreckage after his car, a 2001 SUV, swerved into an oncoming lane then struck a curb and a tree as it careened off the road and down an embankment, authorities said.

It read: “We thank everyone for the overwhelming support support and messages during this tough time.

“As previously communicated, Tiger was involved in a single-car accident earlier this morning in California. He has undergone a long surgical procedure on his lower right leg and ankle after being brought to hospital.”

Tiger Woods’ car
Tiger Woods’ SUV is taken away for investigation
Tiger Woods’ car crash
The car was left on its side (Image: AFP via Getty Images)
In a news conference earlier officials said that there was no indication that Woods was under the influence of any substances at the time of the accident.

No blood samples were drawn by investigators after Woods was rushed by ambulance to the Harbor-UCLA Medical Center.

Tiger Woods
Tiger Woods is “awake and responsive” (Image: Getty Images)
The statement as it appears via Twitter
The statement was released via Twitter
“Comminuted open fractures affecting the upper and lower of the tibia and fibula bones were stabilised by inserting a rod into the tibia.

“Additional injuries to the bones of the foot and ankle were stabilised with a combination of screws and pins.

“Trauma to the muscle and soft tissue of the leg required surgical release of the covering of the muscles to relieve pressure due to swelling.”

The scene of the single-vehicle crash in Rancho Palos Verdes, California

Tiger Woods’ car
The car had left the road (Image: Mark J Terrill for For The
Tiger Woods latest: Golf legend ‘nearly smashed into director’s car before crash’
The statement went on to say that Woods is ‘awake, responsive and recovering in his hospital room.’

It read: “Thank you to the wonderful doctors and hospital staff at Harbor UCLA Medical Centre, the Los Angeles County Sheriff’s Department, and the Fire Department.

“Your support and assistance has been outstanding.

“There are no further updates at this time and we continue to thank you for your well-wishes and privacy for him and his family.”

Woods, one of the world’s most celebrated sports figures, was the sole occupant of the car when it crashed about 7.12 am near the suburban community of Rolling Hills Estates, the sheriff’s department said.

Los Angeles County Sheriff Alex Villanueva said: “The front end of the car was totally destroyed, bumpers destroyed, airbags deployed – thankfully the interior was more or less intact, which gave him the cushion to survive what would otherwise have been a fatal crash.”

Sheriff’s deputy Carlos Gonzales was first on the scene and he said Woods, who still wearing his seatbelt, was “calm and lucid.”

Footage from the scene showed Woods’ car badly crumpled and lying on its side, its windows smashed, after “several rollovers”.

Fire department officials said emergency personnel pulled Woods from the vehicle through the front windshield after the glass and its surrounding frame were cut out and removed.

The cause of the accident is under investigation, though the sheriff said weather was not a factor and the steep and winding stretch of road “has a high frequency of accidents.”

The damaged car of Tiger Woods is towed away

Horror pictures of Tiger Woods car crash show golf legend’s vehicle 30ft from road
Earlier, there were messages of support from well-wishers to the golfing legend after the news broke of the crash.

Ex-US President Barack Obama tweeted: “Sending my prayers to Tiger Woods and his family tonight, here’s to a speedy recovery for the GOAT of golf.

“If we’ve learned anything over the years, it’s to never count Tiger out.”

“Thinking of him and his entire family.”

Woods now faces a lengthy break or a curtailed career. He has previously undergone back surgery five times.